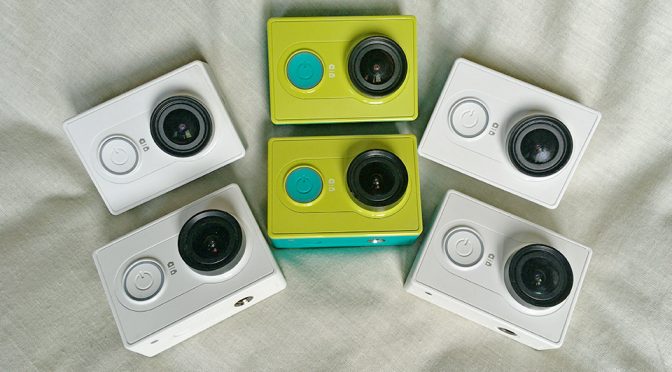 This whole action camera thing is turning out to be an interesting journey.

Since my previous post about picking up a Yi HD Action Camera, things seem to have taken a turn for the extravagant.

After I started playing with it, I realised what one could do to it through script hacking. Then, I got curious. While I saw a big difference in the footage, I wanted to do a direct comparison. So, I acquired a second camera. Next came a dual GoPro mount and a GoPro monopod (I refuse to call it a “selfie stick”, sorry).

Now, I could have two cameras side by side. One shooting as it comes from the factory, one hacked.

On playing back the footage, though, I noticed an odd thing. With the footage laid side by side in a Premiere Pro project, it seemed familiar.

It looked exactly like one of those 3D stereoscopic pictures where you cross your eyes while staring intently at the screen.

A light bulb came on. I can shoot 3D video! It was a dream, a hope, but after a few tests, it turned out to be ok. I was actually pretty impressed how well they did. There’s limitations, of course.

The main one being distance. Because it’s an ultrawide lens it has a horizontal field of view of about 120°. This means objects closer to the camera are huge in comparison to those very far away. It kind of ruins the whole 3D-ness of it all.

You can take the Yi apart and swap out the lens. This would give a more appropriate perspective, but replacement lenses seem to be more expensive than the cameras themselves. So, screw that.

I like my ultrawide angle exaggerated 3D. It’s fun, it’s different, it’s interesting. At least, it is to me, even if nobody else likes it. Here’s a quick early test. More thought out 3D videos will be coming at some point in the future.

But my interests went further, especially after discussing them with DIYP editor, Udi. He suggested I check out Thingiverse and see if anybody had designed a 360 degree rig for these cameras. As it turned out, somebody had.

Before I knew it, he’d printed one out and shipped it to me. After it arrived, I felt kind of compelled to source four more of these cameras. So, that’s what we did. I’m still in the process of figuring out exactly which stitching software to get (they’re not cheap, are they?), but soon I’ll be giving that a go.

For now, though, I plan to shoot a fair bit of 3D. It also means I can capture multiple angles simultaneously behind the scenes on shoots.

I’m starting a vlog. I figured, I have half a dozen Yi cameras, a few phones with decent cameras, and a pair of D7000 bodies as well as decent audio gear.

The more I write for DIYP, the more I’ve been getting into video.

Thus far, I’ve mostly been working with video for recording interviews at events, and creating photographer profile features. It does, however, also open up opportunities for behind the scenes footage, tutorials, and other things. Like, vlogs.

So, now I have a Zhiyun Smooth-C 3 axis handheld gimbal. It is designed for phones, but as my iPhone SE shoots 4K fairly well, it’ll probably do the job just fine for now (although the front camera sucks).

So far, it’s pretty impressive. I’ve had a few people asking me to review it, so that will probably come at some point.

Yes, I could’ve just used a selfie sti… I mean GoPro monopod, but I didn’t want to make you guys seasick watching it.

I’ve not set a date for when the vlog will start, but the plan is for it to be within a couple of weeks. In the first episode or two I have  things I want to talk about, and need to shoot b-roll for them first.

Vlogging is certainly not something I plan on doing daily, but updates should be fairly regular. I don’t know if anybody will watch, or even care. But for those that will watch it. Thank you!

If you have any specific requests or questions for the vlog, you can always shoot me a message on Facebook.