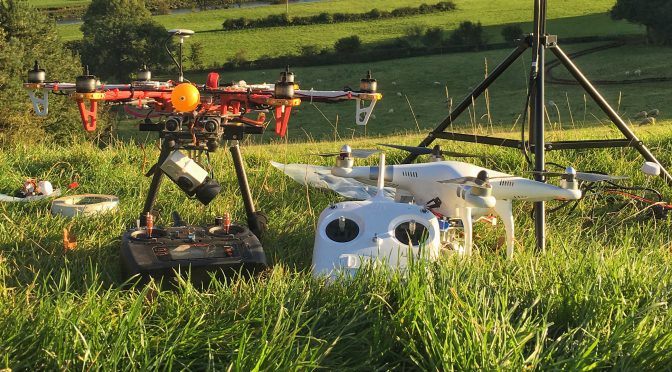 For the last decade or so, I’ve wanted to build a multirotor. Those are what people collectively call “drones” these days. Multirotors are any rotary wing aircraft (like helicopters) with more than two propellers.

So, tricopters, quadcopters, hexacopters and octacopters all fall under the umbrella of “multirotor”. When I first started looking into drones, DJI didn’t exist. Yuneec didn’t exist. Nor did the three million YouTube channels dedicated to drones.

Finding information was difficult. Finding and understanding the components was even more difficult. Especially for somebody who’s never really done any kind of RC (and certainly not flying RC) before.

So, the idea got put on the shelf and forgotten about for a while. Over the next few years, the whole drone thing really started to take off (no pun intended).

Fast forward to a couple of months ago. A friend let me borrow her Phantom while she’s busy with work and university for the next few months. I went out with my buddy Reg to give it a whirl and learn how to fly it.

I was immediately hooked. But I knew I’d have to give this back at some point, so started looking into building my own again.

The main reason I wanted to build my own years ago was just to see if I could do it. I also wanted something with a decent load capacity. Those reasons still hold true today.

I’m not trying to move mountains, but I want to be able to get at least a DSLR up in the air. Sure, there are drones out there that can do that. I really don’t want to have to spend over 5 grand on a drone & gimbal to let me do it, though. Nor can I justify that sort of cost for what would ultimately be a hobby.

Fortunately, these days, finding out information on drones and how to build your own is relatively easy. There’s still a lot of maths and physics involved in figuring things out, but so many people have experimented with various DIY drones now that it’s fairly straightforward to get the answers you’re after.

The prices on parts have come down tremendously compared to a few years ago. Flight controller software has also become so much more advanced than it was.

Two weeks after receiving the Phantom I saw a DJI Flamewheel F550 in the window of my local RC shop. The price was good (very good). It wouldn’t be completely self built (it was pretty much complete already), but it’d let me dip my toe in the water. 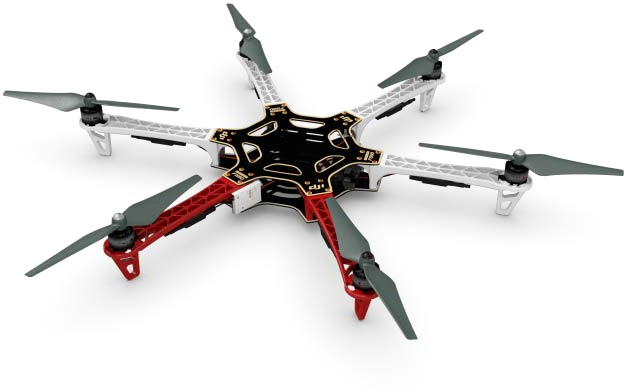 It was a hexacopter, not a quadcopter, so it had a bit more lift capacity than the Phantom. Having six props also gives me some redundancy. If an ESC or motor burns out mid-flight, it’s not going to immediately come crashing to the ground.

Armed with a Spektrum DX8 transmitter, AR8000 receiver, and a few batteries, I set to work. There was a lot of reading and watching YouTube to figure out how to hook everything up. With no prior experience, getting it all talking to each other properly was an interesting journey.

Despite being almost fully assembled when I acquired the drone, I pretty much had to dismantle it completely to actually get to the components and wire everything up to the new receiver. It was a good learning experience, and now I wish I had bought a kit to build from scratch myself (more on that later).

Due to various scheduling, weather and travel issues (Photokina being the biggest one – I’m still working on the video for that, it’ll be up soon!) it was about five weeks between initially acquiring the F550 and sending her on her maiden flight.

We ended up lucking out with the weather, it was a glorious day. I packed both drones into to the car. That way, if the F550 was a big failure from the start, at least we could fly the Phantom.

Today was a fun day. The F550 definitely needs some tweaking, though.

The DJI F550's maiden flight (still need to name her). Damn this thing's quick. Need to adjust the gain levels a little, though.

There are a couple of issues. I’d narrowed them down to either the gain settings or ESC calibration. I’ve addressed both of those now, so hopefully, the next trip out she’ll perform a little better.

My long term goal is to still build my own completely from scratch. For now, I’m learning a lot with the F550. It’s certainly not the kind of drone that can fly itself like the Phantom.

Next, I’ll probably pick up one of the cheap F550 clone kits. There are a few different ones out there on Amazon and eBay, and I may not go with a complete kit. I might buy all the components separately and go for something a little more custom.

I don’t really need another F550, but it’ll be handy to have a backup. It’ll also give me a chance to try out the Ardupilot flight controller side-by-side with the DJI Naza and see how the two compare.

The F550 still doesn’t have quite the load capacity I need for a full size DSLR and heavy pro lens. Right now, I’m just using a standard 2 axis brushless gimbal for action cameras. It will lift a small DSLR like a Nikon D5300 and kit lens or a Mirrorless, though.

So, I still need something a little bigger. Long term I’ll be designing something completely from scratch. There is a weight limit, but I’m pretty sure I can stay under it.

According to the Civil Aviation Authority…

“Small unmanned aircraft” means any unmanned aircraft, other than a balloon or a kite, having a mass of not more than 20kg without its fuel but including any articles or equipment installed in or attached to the aircraft at the commencement of its flight.

I really can’t see myself ever needing anywhere even close to 20kg.

So, the drone adventure will continue. I’ll be using the Phantom and my DJI F550 for getting footage for now. The Phantom will be forever destined to carry an action camera (probably the YI HD).

Once the F550 is running tip top, I’ll look for a gimbal that can hold the YI M1 Mirrorless micro four thirds camera (I currently have one for review, which will be going up on DIYPhotography.net when it’s ready).

When I decide which F550 clone kit I’ll be building next, I’ll document the whole build. You’ll get to see all my screw ups, as well as the successes.

Finally, sorry I’ve not posted anything to the vlog for a little while. I had planned to be far more regular with it. But, Photokina happened and completely threw off my schedule.

I shot so much footage in Germany, that trying to get something coherent together is proving to be difficult to impossible. But, I am working on a Photokina video, and hopefully I’ll have it up in the next week or so.

After that, the vlog should be back to its semi-regular schedule.