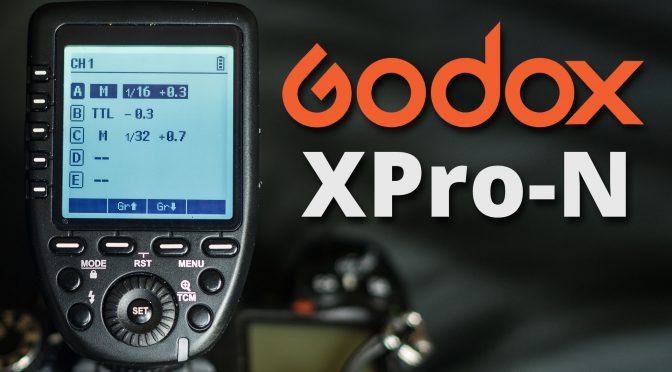 There’s two things I want to say right at the start of this post.

Firstly, I’ve written about this trigger once already on DIYPhotography.

If you haven’t read that post, I suggest you check that out first. I don’t want to duplicate content, and my initial thoughts haven’t really changed.

Second, buy the XPro. For real, just get the XPro. The XPro-C for Canon is shipping now, and the XPro-N for Nikon ships in a few days. Trust me, it’s worth it.

Godox originally sent me the XPro-C trigger for Canon. But that was a bit of a problem as I shoot Nikon. I could test the majority of the features in single pin mode, though. But, it meant I couldn’t test out High Speed Sync (which I use often) and TTL (which I don’t).

They sent over the XPro-N for Nikon a short while later. So, I organised a shoot with the wonderfully talented Anastasia to go test it out.

And, yes, I did shoot a behind the scenes vlog while we were out.

At the time of the shoot, I’d already had an XPro trigger of one flavour or another in my possession for around three weeks. So, I was already quite familiar with it. At least, I was familiar with it in the confines of a controlled environment. An environment where I could take my time.

Out in the wild, on location, where you’re potentially racing against the light, clouds and rain, you have to think quick.

Without the time to really think about what I was doing, using the XPro did take some getting used to. Mostly just a case of learning that new muscle memory to remember where the buttons are for various functions.

One of the first things that struck me, as I often shoot high speed sync, is that the trigger doesn’t automatically go into HSS mode when you go past 1/250th.

In fact, it won’t even let you send the camera past 1/250th if you haven’t enabled HSS on the trigger. This is a great feature if you’re regularly mixing Godox gear with lights that don’t support HSS.

You can, of course, leave the HSS option turned on all the time, and then it’ll just adapt to whatever shutter speed you set. When I’m in the studio mixing my AD360II lights with my Bowens Ringflash, it’s nice to be able to set that limitation. No longer will I accidentally set my shutter too quick and see black bars in the photo.

Overall it performed very well. I never use TTL, so the session largely went by in the usual way. This means setting the power manually and metering through either the histogram or my Sekonic handheld incident meter.

It was easily as reliable as the Godox X1T trigger we’ve come to know and love. But, the user interface is so much better. Once I started to get used to the new button layout, workflow was a breeze.

So, how about that TTL to Manual conversion (TCM) feature?

Well, I figured to test out the TCM feature I’d need to play with TTL a bit. It’s probably been about five years since I last had a flash in TTL mode. Although you never really forget.

Sure, I could’ve knocked -2/3rds EV into the TTL exposure, and then converted it, and it would’ve given the same end result. I just find it quicker and easy to tweak the manual setting.

Kev showed up towards the end of the shoot with his Pixapro CITI600 (Godox AD600) so we could mix it with the AD360II into a single setup.

The TTL for the key light ended up being much more accurate on the AD600 than it did with the AD360II. I reconfigured the trigger to 600J, and tried again.

But this is where things started to get a little odd. The AD600 kept its exposure just fine, but the AD360II ended up being quite underexposed after doing the TCM reading. I touch on why I think this may be happening in the video at the top.

After doing a couple of quick tests at home since then with the AD360II and a Nikon SB-900 on a Godox X1R (or Pixapro ST-III receiver, to be precise), things got even more confusing. Results seemed to vary kinda wildly.

I’ll also be mixing multiple lights together in the same setup to see what the trigger makes of them. Once it arrives and get time, I’ll either pop up another video going through everything, or I’ll write it up for DIYPhotography.

Still, even if it turns out that the TCM function is completely useless, the XPro is still worth getting. You lose nothing over the X1T’s feature set, and gain a whole lot in terms of workflow speed.

The XPro-C for Canon is shipping now. The XPro-N is currently available for pre-order and should start shipping in a week or two.

Godox say that the Sony version is coming next, followed by Fuji, and then Olympus/Panasonic.