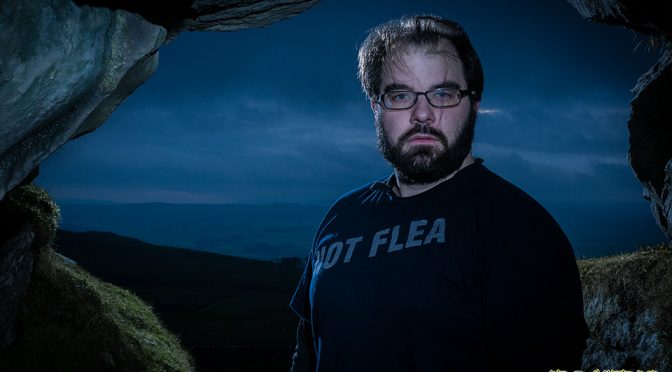 That’s “clouds”, as in, “those pretty white balls of fluffy stuff in the sky that are actually just big masses of static rain when you’re standing inside them”.

At some point around the middle of 2013, fellow photographer and good friend Graham Binns got in touch, as he does from time to time, to ask if I’d be interested and able to assist on a shoot.

I’ve assisted Graham before, a couple of times, and he’s assisted me in the past, too.  Whenever Graham and I get together, no matter who’s shooting, I know it’s going to be a fantastic day, we’re both going to come home exhausted, probably in a great deal of pain, and at least one of us will get wet.

This shoot ended up being several months in the making due to various weather and scheduling issues.  After a couple of meetups for a chat over coffee to go through ideas and figure out some of the logistics, it was December before we actually got to go out to the location and do some lighting tests. 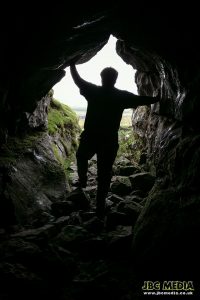 The fundamental point of the lighting tests was to try to turn day into night, and we figured that during December, the sky would be mostly covered in clouds, fairly dull and uninteresting, low contrast, and give us a lot of options to overpower and relight the scene with flash.

The shoot itself was also originally scheduled for December for these exact reasons, however once we arrived at the location, despite the relatively (for December) warm temperatures, the hurricane force winds convinced us we should probably wait a couple of months.

But we were there now, so we pressed on with the lighting tests.

We’d already figured several lighting ideas out in advance to give us the looks we were going for, which was fortunate given the wind.

While we had the cave to hide in from the brunt of it, once we were outside we had to work quickly to get everything setup and (mostly) windproof before doing some test shots.

We also went with minimal gear so that we could carry everything easily and comfortably in just a single trip.  One backpack for Graham, one backpack for me, and a Crumpler messenger back with a stack of speedlights in it.

The ground immediately outside the cave wasn’t exactly flat and level, so we had to come up with some creative lighting rigs (involving lots of gaffer tape) to stop everything from falling over without actually appearing in the shot.

Issues like these are the primary reasons we location scout and often do lighting tests before an actual shoot is performed.

On the day of the shoot itself, after taking almost two hours to cart all the equipment from the car to the cave over several trips, everything went off without a hitch

Standing in a cloud all day presents two pretty major problems when working around expensive electrical equipment.  How to keep it all dry, and how to keep batteries warm for the flash units and cameras.

Keeping things dry was fairly straight forward.  Bin bags and gaffer tape to the rescue!  Keeping things warm was another matter entirely.  Fortunately, I had the foresight to bring some instant lighting logs which burn for about an hour each (I didn’t know for sure that we would need them, but they’re usually in my “just in case” kit when working on location), thus allowing us to keep ourselves relatively dry and warm, as well as heat an area of the cave in which we could store batteries when not in use.

You can read more about the shoot and see some of the results over on Graham’s website.

I do particularly like the last one, as it goes into a bit more detail on the conditions we had to deal with on the day, but they’re all a great read, and the results speak for themselves.

Graham and I have already begun planning our next jaunt together, only this time he’s the one being relied upon to make sure I come home with all my limbs intact, but more about that another time.

Note : As soon as Graham releases the final part to this epic saga, I’ll update this post to include links.