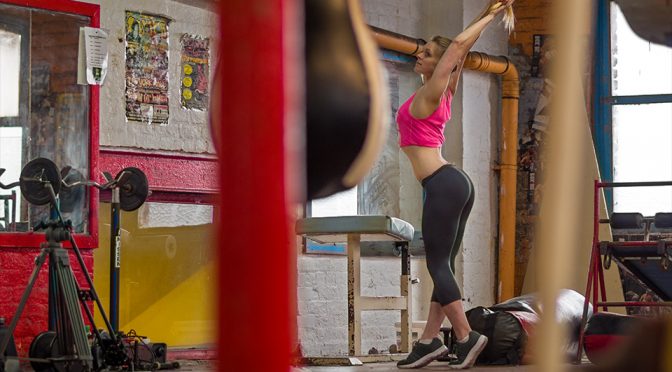 Ok, I’ve been slacking a little bit on the video front (sorry!). Since Photokina, I’ve just been absolutely swamped and had little time to get out and even film let alone edit.

I did however, head back to the gym with Saffron Sheriff to shoot some video stuff for her new YouTube channel over the weekend, and also a few stills for her Instagram.

I’m constantly asked about the gear I use on photo and video shoots. And, as Saffron likes to make any excuse she can to play with my gimbal, this seemed like the perfect time to shoot a video going through it all.

As I said in the video, I did take a little more than I normally do, because we were shooting a few stills, too. So, I’ll list the video stuff first, and then the extra stuff for stills at the end.

First up, the stuff used to actually record the video above itself. I film on my iPhone SE, which isn’t great by itself. The image quality isn’t bad, but sound in a location like this isn’t good, and who really likes handheld jerky phone videos?

This is the kit I normally take out with me now when vlogging. The audio might be a little over the top, but the quality’s worth it. Also part of my regular mobile vlogging kit are…

That lot all fits easily inside my regular everyday backback along with a tablet or laptop and whatever else I happen to need to carry around with me that day. It takes up little space, but offers a lot of versatility.

If I want to go ultralight, and I’m only recording my own voice, then I may leave the wireless lav kit & DR-100 at home and take out the Rode smartLav+ and record the audio to my old iPhone 4S (pretty much its only job these days).

Now, the extra video stuff I took for this shoot. First up, the cameras and lenses. I normally take a backup body on any photography or video shoot, but this time they were both working. One primarily for video, the other for stills & b-roll.

The next chunk of gear is camera support & movement. I do take the little slider with me when I’m vlogging anyway, but it’s not really big enough for a DSLR.

Instead of field monitors, I view what my camera sees with an Android tablet running qDslrDashboard. This option means that I can also view them wirelessly.

This setup is extremely handy whenever I need to film myself talking to the camera. I can connect to both cameras simultaneously from a single tablet, complete remote control, including autofocus. I can also stream liveview from either camera at will.

Then there’s all the extra little bits that just make life a whole lot easier.

Finally, a few extra bits that were just for the stills.

There was also a couple of cheap lightweight light stands, gaffer tape, spare batteries, and so on. The usual stuff.

My gear changes from shoot to shoot. It all depends on the needs and demands of the shoot. Sometimes it needs more cameras, a different set of lenses, portable continuous lighting, or other gear.

So, I’ll probably make a few more of these videos whenever a shoot demands a specific set of gear that’s significantly different to that above.

And now, some Saffron silliness.

I also used some of the footage on the gym shoots for my Saramonic UwMic9 wireless dual lav mic kit review, which you can check out over on DIYPhotography.net.

So, that’s it for now. Any questions about the gear, pop ’em in the comments below.

This Is a Generic Brand Video