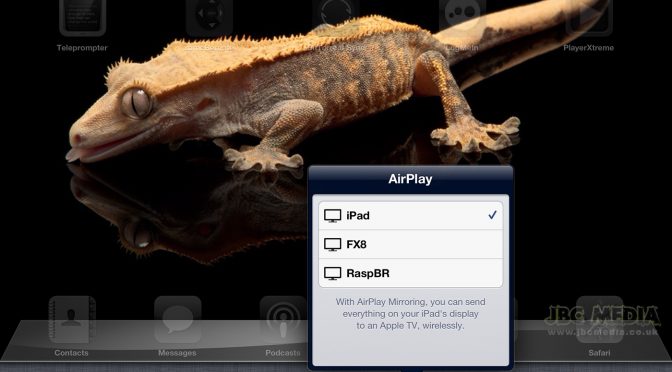 There’s just no app for iOS that allows you to do this (something about Apple’s prison-like API), unless you jailbreak your device – which is something I don’t really want to do.  It’s nothing to do with respect for Apple or risk voiding my warranty, I just simply can’t be bothered.

Anyway, back to the point.

During my searches, I ran across this amazing application called Reflector, which allows me to mirror my iPhone or iPad display right on my PC’s desktop (or both at the same time, if I really want to) via, you guessed it, AirPlay!

This means I can record videos from my iPhone or iPad display with the same software I use for recording my regular Windows desktop.

For those interested, recently, that’s Fraps.  Despite being aimed at gamers, it does rather well at recording the regular Windows desktop as well.  I had given the latest version of Camtasia a trial, but it seems to have some issues (that I’m not going to get into here).  I already owned a copy of Fraps after purchasing a license a few years ago, so figured I’d give it a go, and whaddya know?  It worked!

A little more digging, and boy was I surprised to find out that the XBMC machines I’ve been running on the Raspberry Pi the last few weeks actually support AirPlay right out of the box!

XBMC doesn’t mirror your desktop, but pretty much any video file played on your iPad or iPhone can be sent out full screen to your TV (or monitor, or whatever your XBMC machine happens to be sending out to – in my case, it’s a TV).

Facebook, Youtube, BBC iPlayer (sort of), and a whole bunch of other iOS apps just work, and start streaming video over WiFi straight to your TV.

Anyway, that’s it, just wanted to show off this cool new application I’d found and share a revelation.

Now to get Asphalt 7, and see how well it works using the iPhone as a controller for a game on a remote AirPlay display!

XBMC on a CubieBoard?

The Joy of rPlay (or not)